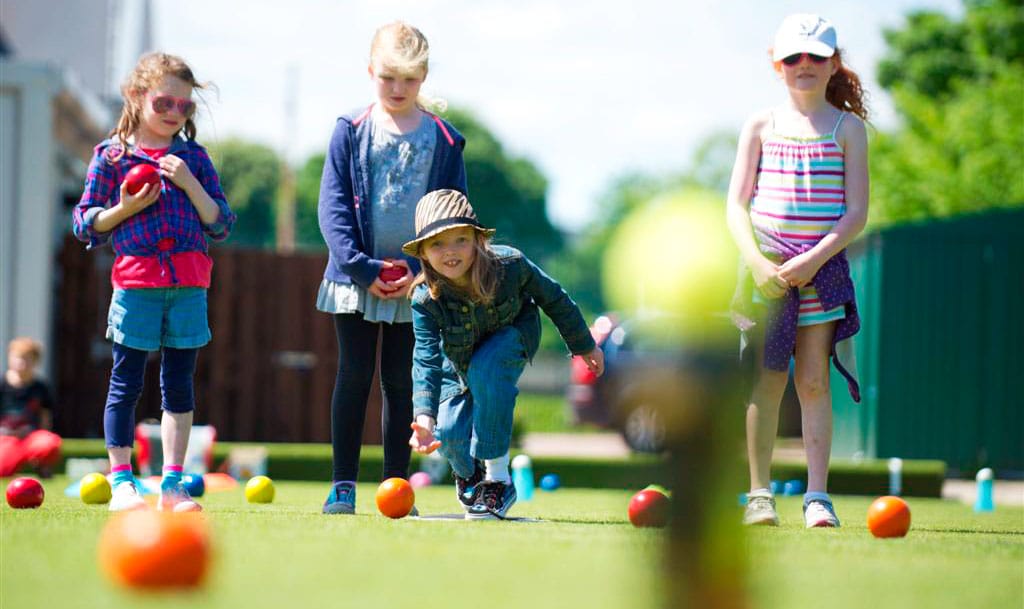 The English Bowls Coaching Society has, for several years, carried out coaching with young players, both male and female, ranging from ten to eighteen years of age, and the standard of skill demonstrated by these young players has been most encouraging.

Many followed parental preference for the game but there were others who came into bowls entirely of their own accord. It is interesting to find that a lot of the present-day stars of the bowling world began at a very young age (although that is not to say they eschewed other sports).

This early beginning must have had a positive effect on shaping their future prowess. What schools can offer young people today has certainly widened, when compared with days of old, in terms of physical education and games. Many schools, during summer terms, offer an activity week where young people can choose a particular activity and there are now several who choose to be taught the game of bowls. At this time of year, there are several indoor bowling clubs which can offer their facilities for such groups.

Of course, it will be an advantage if there is a member of staff who has had some experience of the game itself. The ideal situation would be that a member of staff has already qualified as an instructor under the English Bowls Coaching Scheme. However, many indoor clubs have at least one qualified coach and usually they are prepared to give their time in helping introduce young people to the game.

These early sessions are very important. The instructor must use his skills in establishing the correct rapport with the group, so as to foster and encourage their initial interest. This calls for great skill on the part of the instructor as a communicator, and is vital for the overall success of the session(s). He must ensure that a range of sets of bowls are available for the group, as well as correct footwear.

Some coaches allow beginners to play in stocking feet but this is not always a good idea. Practical preparation is important before such a session so that all necessary equipment is at hand because, like all of us, young people do not enjoy having to wait about.

Rather than dealing with just one bowler at a time, and have others sitting around, it would be sensible to involve them all. If there is a group of six, the other five could be invited to step on to the green so that they could listen to and watch what was taking place.

After the first bowler had gone through the exercise of delivering the jack to the coach’s satisfaction then the others could, in turn, be asked to do the same. The whole group needs to be involved in the learning process so that everybody’s interest is maintained.

Following the jack rolling, each member of the group could then be asked to pick up a bowl. Not everyone will choose the bowl best suited to them but the coach should allow free discussion and for them to make mistakes. It can be very easy with such a group for the coach to impose his ideas but this must not happen as each player needs to be encouraged to think for himself as an individual, and express his own opinions.

There is one group of schools in the Bristol area that do not have to rely on the availability of indoor greens, as they have been fortunate enough to find sponsorship which provides them with short mats (45ft/13.7m long). This is the way many young people have been introduced to the game of bowls and it does create appetite for playing on a full-size green. Generally, young people can be quick to adapt to the demands of a full-size green, making use of the skills they have already learned.

Younger bowlers are now finding a welcome at club level. They can represent the ‘seed-corn’ for the future, not only for a club, but for the game. International matches and inter-county matches for teams of under 25s are now well established for both men and women. Full international squads now have a much younger average age than they had some years ago. Therefore, a great deal of encouragement can be found for any young person who wishes to take up the game of bowls.

Such encouragement offered by more experienced players or club officials can only be good for the future of the game. The suppleness and athleticism of young players and the ease of their smooth delivery action may be the envy of the more elderly members, but the game only begins with the delivery action – there is much more to learn. Many coaches have been pleasantly surprised by the receptiveness of young players to coaching.

The eagerness to listen, to learn and to improve their game is very evident. The game cannot afford to lose this enthusiasm and thirst for improvement, but must channel it into well-planned coaching sessions, which include discussions on such issues as how a shot is selected, and practices that are purposeful and have been carefully explained by the coach, so that the young players have a clear understanding of the achievement level expected of them.

Under the guidance of the coach, the game can be ‘frozen’ to allow general discussion about, for example, the options open to the next person to bowl. Are there any percentage or conversion shots available? What possibility is there of something going very wrong? Throughout such exercises, the coach must always frame his speech in the form of questions and never demand that a bowler play this or that shot.

He must encourage discussion, prompt argument, and be sure that all players are invited to make their point of view known to the group. He must know the exact moment to stop the talking and invite the player to play the shot he has opted for.

As soon as the bowl has come to rest, the head, in all possibility, has changed again, so discussion begins on the next shot to be played. This activity has been labelled ‘freezing the head’ and has been enthusiastically received. Young bowlers, in particular, relish the opportunities for voicing their own opinions, as well as recognising that they are improving their knowledge of the game generally.

They also bring to this exercise a youthful exuberance that the good coach will use wisely, in order to motivate sound positive thinking and build confidence.

There are several other areas of the game where such exercises can be used to further overall knowledge of playing the game of bowls, but it is important to stress that such practices should take place on the green and should always be related to the actual game situation.

Coaches should always plan such practices very carefully, and any bowls he used in preparing for them should be placed judiciously. The players should be made aware of the score, and the end being played, and a situation should never be created where one bowl could bring an abrupt end to the session, i.e. by tracking the jack into the ditch.

Encouragement must be offered to young bowlers on every possible occasion. The game of bowls will benefit from their participation and it should follow that standards of performance will steadily improve.