Beginner’s guide to the increasingly popular short mat game. We cover the origins of the game, it’s unique rules, equipment and some general tips and advice in how to get started playing and best playing practices!

The short mat game began in Ireland and was later introduced into this country. There now exists the English Short Mat Bowling Association (E.S.M.B.A.), which is supported by regional associations.

The game has its own set of rules, and any prospective player would do well to be conversant with them before playing the game proper.

As the title implies, the game is played over a much shorter length than the flat green game. The carpet is between 40-45ft (12.2m – 13.7m) and 6ft (1.8m) wide. At both ends, there is a fender, and 1ft (0.3m) in from the fender there is a white line, representing the ditch. There are other white markings on the carpet but players would be best appraised of the reasons for such markings by studying the rule book.

Equipment to be used is the same as that for playing on the larger indoor or outdoor surfaces. There are regulations as regards the weight or size of the bowl to be used but, in the main, those who have the necessary equipment for playing the outdoor or full-length indoor flat green game would be correctly set up to play the short mat game.

The basic skills required for playing the short mat game are exactly those for playing the flat green game indoors and outdoors. These are, of course, line and length. Any short mat player must practice and perfect both as far as possible. He must develop a good ‘eye’ for the line and a good ‘feel’ for the weight he needs to bowl a correct length.

The fact that normal-size bowls can be used will also assist the player in developing his individual grip. He will also learn that it is essential to get the body as close to the playing surface as possible, and he will certainly learn the importance of the speed of the arm coming through to enable him to bowl the required length. 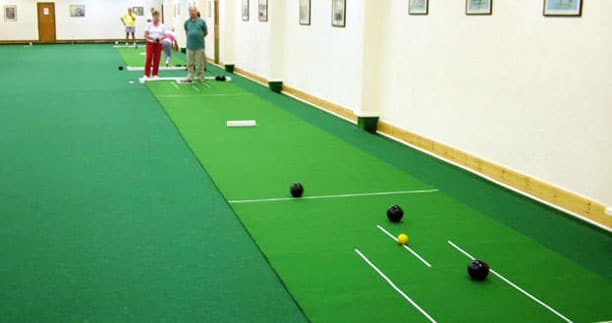 Because the mat is only 40-45ft (12.2-13.7m) long, it can be laid on a large variety of surfaces, providing the surface is flat, and so leisure centres can be used. Usually more than one carpet can be laid because such centres offer an abundance of floor space. Halls of every description are usually acceptable, even if the carpet has to be laid diagonally. Short mat offers the extra bonus that the carpet can be taken up, rolled and stored away at the completion of the games, thereby enabling the hall to be used for any other function.

It is yet another advantage of the game that players can be protected from the weather and are therefore reasonably sure that they can play their game at the date and time arranged. There are several bowling clubs that play the short mat game during the winter months in their club pavilions and it has been known for some to extend their existing pavilions to accommodate this short mat. Such actions speak volumes for the popularity of the game as a whole.

As well as the reduced length, the short mat game has also introduced a block. This block is 15in (4.6cm) long, 3in (7.6cm) high and not more than 3in wide, and is placed at the centre and across the mat. Any bowl that touches the block on its course across the carpet is declared ‘dead’ and removed. It also has another purpose. Over such a short distance, it would not be too difficult for a bowler to use a heavy bowl to disturb or break up the head. 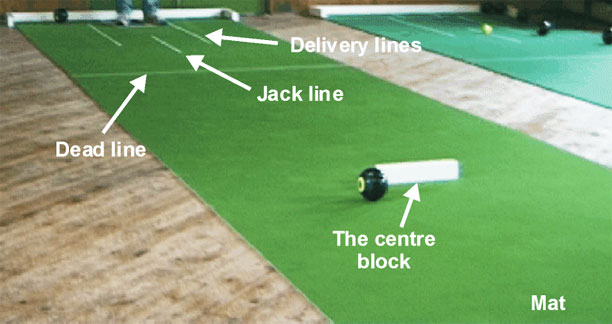 The block can effectively prevent this from happening and, therefore, the majority of shots that will be played will be drawing shots. Of course, if a jack has been moved off the centre line, a player of some skill could still use the heavier bowl to gain an advantage but the use of the block has certainly influenced players to think of the drawing shot as being the most important shot to learn, which is a positive point as it is basic to the playing of the game, no matter what length of carpet or rink is used.

The growth of the short mat game has been quite startling in so short a period of time. The example of one county that went from nine short mat clubs to more than eighty over a two-year period speaks for itself. This kind of growth has been particularly evident in areas such as the South West, but it would be wrong to think that it is confined to predominantly rural areas.

There has always been the grumble that there is not much to do in such rural areas during the winter months, but it would be an oversimplification to suggest that this is the main reason for the popularity of this game. Indeed, there is evidence that the short mat game has an enormous attraction for many thousands of bowlers in all parts of the country.

It would also be somewhat naive to imagine that short mat clubs are mere ‘nurseries’ for the outdoor or indoor flat green game. However, it must be said that many people do turn to the short mat game because they are unable to join a flat green bowling club that is already over-subscribed, and probably has a waiting list.

The short mat might also give some players the appetite to play on larger surfaces and, if they live in parts of the country where they are able to join bowling clubs, they can fulfil that appetite.

One group of bowlers who benefit greatly from the short mat game is the disabled. There is obviously no great physical input required, and for those in wheelchairs there is an ease of movement from the mat to the opposite end of the playing area that they would not find in either and indoor or and outdoor bowling green.

The players of short mat bowls are no less competitive than their counterparts who play on the larger playing surfaces, and this is quite evident from the league structures that now exist. Results and league placings are published in local newspapers and are avidly scanned by those who wish to work out the possible chances  for promotion or indeed demotion.

Also, since 1986, International Series between England, Scotland, Ireland and Wales have been staged, as well as championship matches. It would be equally wrong to assume that the short mat game is any less exciting. Bowlers demonstrate the same keenness, dedication, skill and determination as they do in the outdoor game.

There is no less delight at having played a good bowl, as the length of the carpet does not affect the obvious pleasure of succeeding in beating your opponent.

The age range of those wishing to participate in the short mat game is even wider than that of the outdoor game. Young people of even eight or nine years of age take part, these could prove to be good ‘seed-corn’ for the future of the game as a whole.

Admittedly, some younger players may find it difficult to hold even the smallest bowl allowed by the rules but they are still learning so many other important things, especially the etiquette of the game.

There seems to be no reason why interest and participation in the short mat game should not continue to flourish. There will be a number of players who may never wish to play on any larger surface, but always stay with the short mat game of bowls. As in all sports, the majority of people like to win, but possibly more important still is the enjoyment that any game has to offer. This enjoyment appears to be abundantly evident in so far as the short mat game is concerned and, therefore, it will retain its devotees and practitioners and its status as a game in its own right.